Born in Albacete (Spain), Doctor of Music from the U.A.X. and Professor of Guitar at Madrid Royal Conservatory of Music, he received the following training and obtained the following academic degrees: 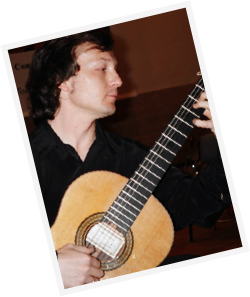 He has made recordings for radio and television: RTVE, Radio Clásico, LT-8 Argentina, Radio Cultura de Brasil. He is an artist of Mediaset TV Spain, for whom he has made audiovisual productions with baroque guitar that are broadcast on the television program Musical Cities of Telecinco (Spain) and are broadcast on Iberia airplanes.

He has taught masterclass with classical guitar, baroque guitar, vihuela, tiorba and archlute and has performed continuously since 1990 tours of concerts alone, in chamber and with orchestras (Aranjuez and Andaluz Concerts, Vivaldi and Carulli concerts) in USA, France, Holland , Greece, Germany, Italy, Spain, Portugal, Argentina and Brazil. Among those are remarkable his performances as a soloist with baroque music of Biber and Weiss in the Early Music Festival of Berkeley (USA) and his performance with early Spanish music for S.A.R. Queen Sofia of Spain and Mr. Ambassador of Spain in Athens (Greece). 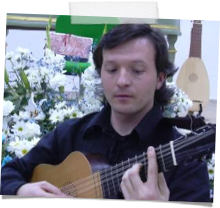 He is a founding member of the ensemble "La Reverencia", and is usually invited to various ensembles of early music throughout Spain. He is a Resident Through-bass player with baroque guitar, tiorba and archilaúd of the Albacete Symphony Orchestra and the Praeteritum Ensemble. He has performed at the International Festivals of Early Music in Úbeda, Gijón, Simat and Utrecht (Holland).

He has made premieres and first recordings of contemporary live composers such as Salvador Brotons, Roxana Paredes or David Cuevas.

He has published 11 CDs, being a pioneer in the publication of multimedia CDs with audio including scores and musicological study, as well as a pioneer in the publication of live CDs with Renaissance, Baroque, classical and contemporary repertoire (Live in Berlin, QTV, 2014). He has also published books and musical research articles for the I.E.A., Hispanica Lyra, Magazine of the S.G.R and the musical research magazine of the CSMCLM Consonancias.

He has given lectures, conferences, courses and masterclass at the Festivals:

After winning two teaching positions by opposition in different fields (M.E.C. , Junta de Andalucía), he is a titular professor, on leave, of Teachers of Music and Performing Arts Corps for the specialty of Guitar, having been a Baroque Guitar and Guitar teacher in the Conservatories "Jerónimo Meseguer" of Almansa and "Tomás de Torrejón y Velasco" of Albacete ".

He worked as a Professor of Guitar, Baroque Guitar, Tablature and Continuo Bass of the Conservatory of Music of Castile-La Mancha.

Since 2019 he is a Guitar Professor of the Royal Superior Conservatory of Music in Madrid.

Since Leo Brouwer highlighted the professionalism of his interpretations, the specialized critic has written: “His interpretation was impeccable, impressing the public despite the complexity of the works addressed with the guitar” (Violao Interchange). “An exceptional concert, with an unquestionable attraction between virtuosity and emotion”, “One of the most outstanding European performers” (Tribune). “A warm, deep and very human reading, in an admirably tainted vihuela” (CD Compact). "... deep connoisseur of the repertoire, knowing how to transmit their language both with a careful interpretation and with specific explanations of the works performed." (The New Spain).